Enter the melancholic life of a Japanese high school student, as you soon become entwined in the dispute between two female students. Learn more about their past as you piece together their relationship and mend their bond, all whilst forming bonds of your own.

Enter the melancholic life of a Japanese high school student, as you soon become entwined in the dispute between two female students. Learn more about their past as you piece together their relationship and mend their bond, all whilst forming bonds of your own.

Players will be presented with both conventional and unconventional choices which shape the relationship formed with the girls. Help restart the Science club or choose to increase your athletic capabilities as you grow closer to she who holds the key to your heart.

Between two girls' hearts lies a rift. One of misunderstanding, conflicting views and deceit. Each having a dream far too different from that of the other, but somehow keeping themselves ever so similar. Struggling to keep up with your own responsibilities, you stopped being a dreamer long ago. By chance, the lives of these two girls engrosses your world as you unwittingly form new bonds with them whilst trying to mend the broken ones they once held so dear. Maybe then, their dreams can come to fruition as you learn more about them and what matters the most to you.

Frequent updates on the project can be found on twitter @dssansVN 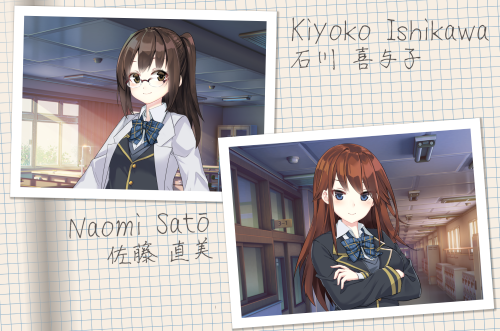 Kiyoko Ishikawa (CV: N i i)

As an aspiring scientist, Kiyoko prides herself on her ability to control her emotions through the use of logic. At least, that's what she believes. Despite having an overly emotive personality, she's often mistaken for the quiet type despite having a lot to say. Her inquisitive nature usually leads to chaos, as despite enjoying an experiment or two she has no concern for health and safety procedures. Kiyoko is the founder and currently sole member of the science club and tends to keep to herself, being known around the school for her outstanding intellect.

Naomi is a girl with plenty of passion, most of which she puts into her attitude. Extremely popular, even to those of the same sex. She isn't afraid of conversation, however despite her popularity her social circle is quite limited. She is the captain of the athletics team when she isn't having her say over every sporting club in the school. She'd be considered a tomboy by most outsiders, but those who know her well are privy to her innermost girlish quirks.